Old cut diamonds vs round brilliants… what’s the difference? 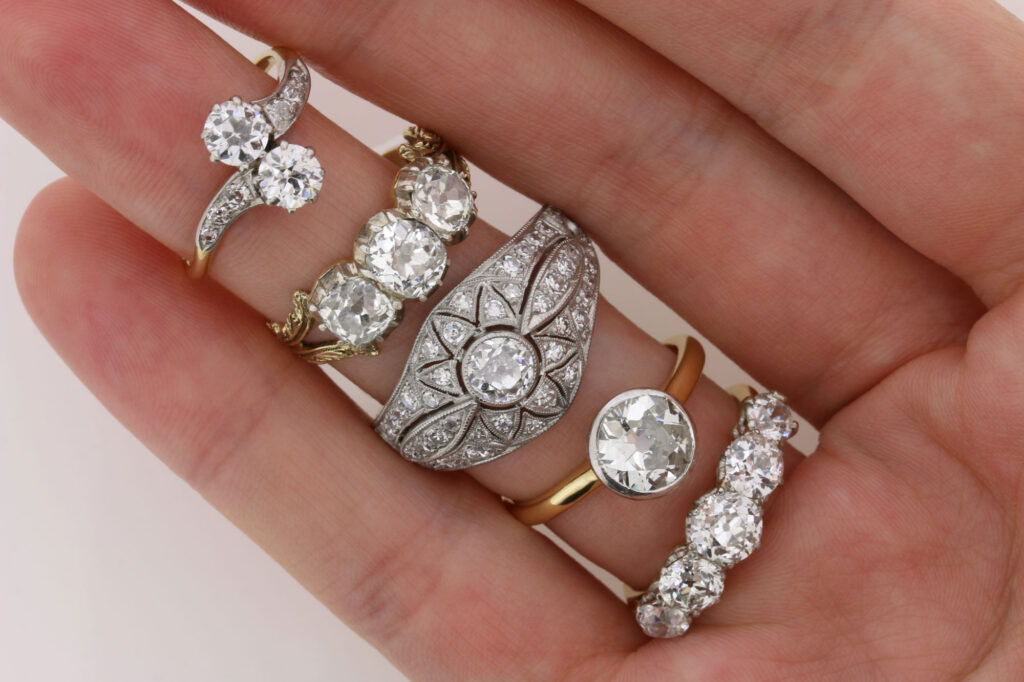 Anyone who has shopped for a diamond is probably familiar with the ‘4Cs‘. While many people focus on a combination of colour, clarity and carat weight, the fourth ‘C’, how a diamond is cut, is a widely undervalued yet crucial factor influencing a diamond’s beauty.

Cut pertains to so much more than a diamond’s shape. Even when comparing diamonds of the same shape, their symmetry, proportions, polish, number of facets and the proportions of these facets have a profound effect on how well each diamond reflects light. These same attributes are what separates old cut diamonds from their modern counterpart, the round brilliant cut.

So, old cut diamonds vs round brilliants… what’s the difference?

The late 1800s  brought significant advances in the art of diamond cutting. The crude cutting techniques that produced rose cut diamonds evolved into more refined techniques that resulted in what we now call ‘old cut’ diamonds. These newer techniques used steam-driven and motorised tools that enabled cutters to shape diamonds more precisely. During this period, changes to the number, placement and proportions of facets resulted in diamonds that were more brilliant than had ever been seen before.

Old cut diamonds are recognisable by their round outline, fair symmetry, high crown, small table, circular girdle, large facets and in many cases, a flat and polished culet. They also tend towards deeply cut proportions, making them appear thicker than round brilliant cuts.

Five characteristics of old cut diamonds vs round brilliants 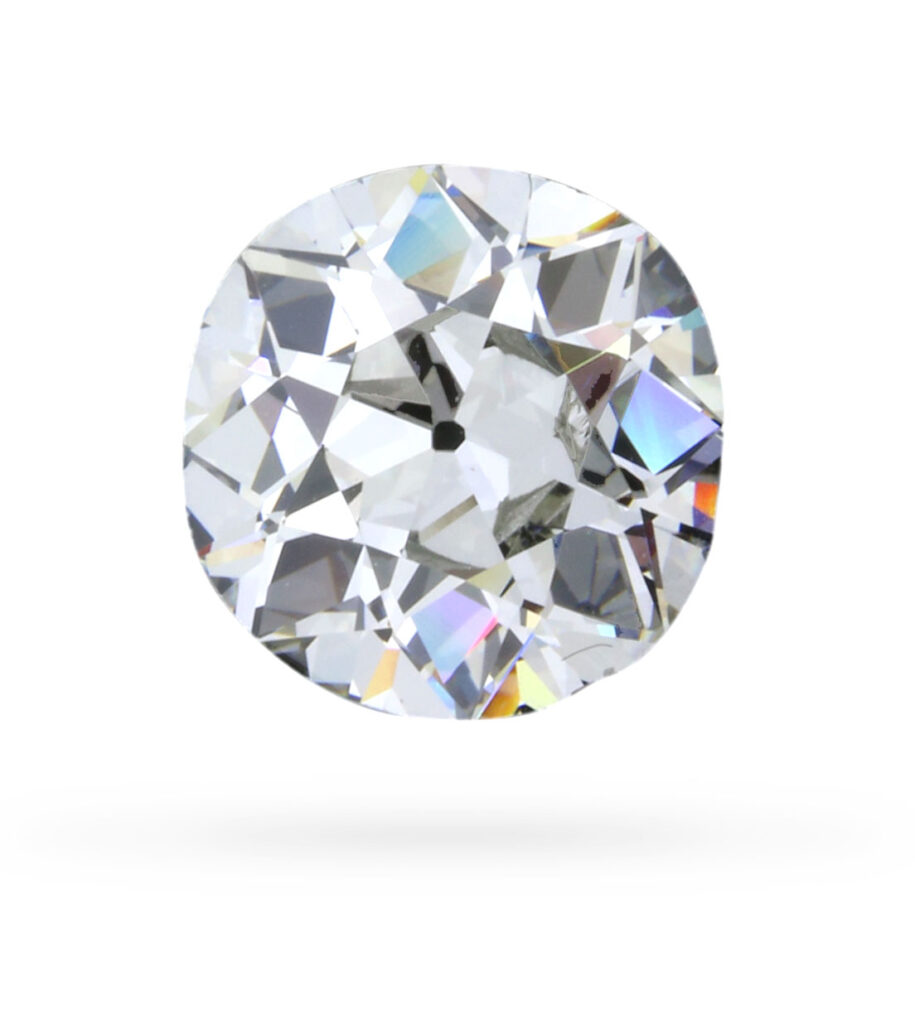 When viewed from the top, an old cut diamond will be nearly perfectly round, just like a modern round brilliant cut. The invention of steam-driven and electric cutting equipment in the late 1800s finally made it possible to cut round diamonds on an industrial scale. 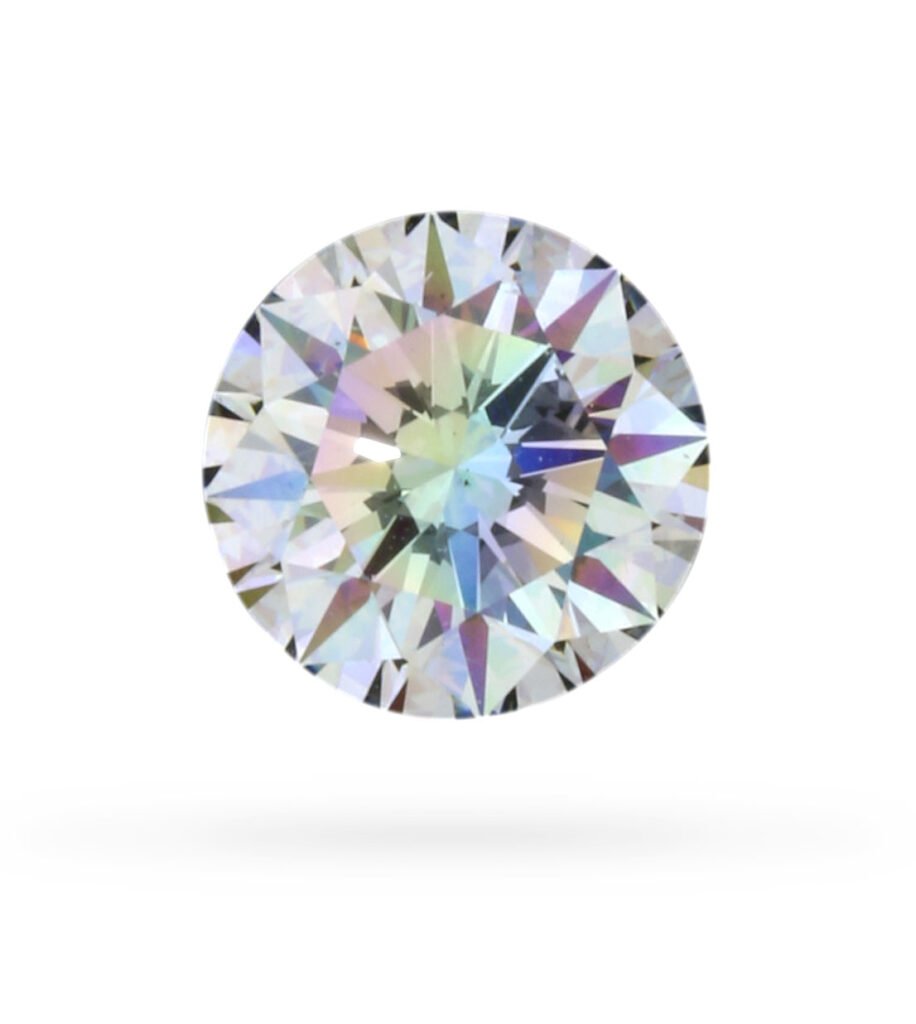 One of the things that many people love about old cut diamonds vs round brilliants is that fact that they were cut by hand. Romantics are drawn to the idea of a craftsman at his workbench hand-cutting their stone over a century ago. This legacy is evident as a close look at any old cut diamond will quickly reveal that its facets are bigger and less uniformly-shaped than those of a modern brilliant cut stone. Each stone has its own recognisable sparkle due to the shape, size and placement of its facets.

Again, because old cut diamonds were hand-cut, they’ll lack the symmetrical precision that we’ve come to expect in modern cuts. It’s not unusual, in fact it’s quite common, for an old cut diamond to have some irregularities in the shape and alignment of its facets.

Due to advances in diamond cutting techniques, most modern diamonds have a pointed tip at the bottom, which reflects any light entering the stone. Due to the cutting techniques used to produce old cut diamonds, the pavilion facets are rarely uniformly cut and at the proper angle. This means that old cut diamonds rarely end in a perfect point. Instead, they end with an open culet that may be rough or polished. Diamond cutters at this time believed that the culet let more light into the stone, thereby increasing its brilliance.

To people unfamiliar with old cut diamonds, the culet, which appears as dark circle, can be mistaken for a hole or an inclusion. However, it’s actually the 58th facet and one of the most easily-recognised attributes of old cut diamonds vs round brilliants. 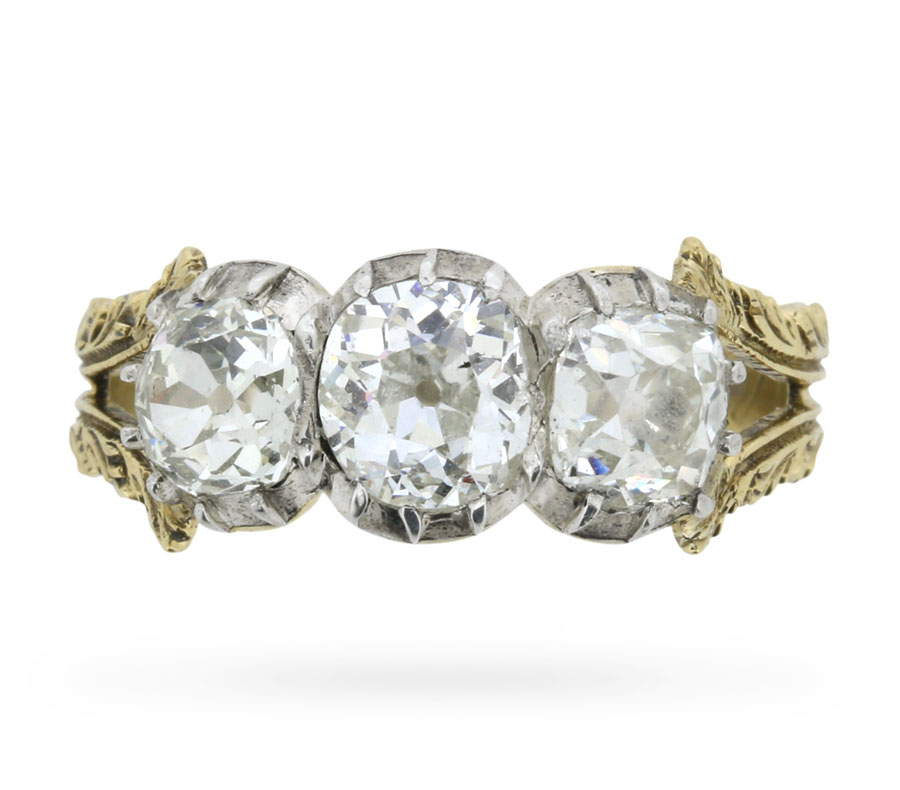 Old cut diamonds were the prevailing style from the 1890s up until the 1930s. They figure prominently as the principal stones in pieces from the Victorian, Edwardian and Art Deco periods.

Old cut diamonds, especially in larger carat weights, are becoming increasingly rare. Many of these stones have been re-cut into round brilliants, which some people believe improves their proportions and how the diamond interacts with light, thereby increasing its value. With this in mind, a Victorian era engagement ring like this one dating from the 1880s and featuring an EDR certified, VS1 clarity, 2.83 carat, old cut diamond is a unique and increasingly rare piece to behold. 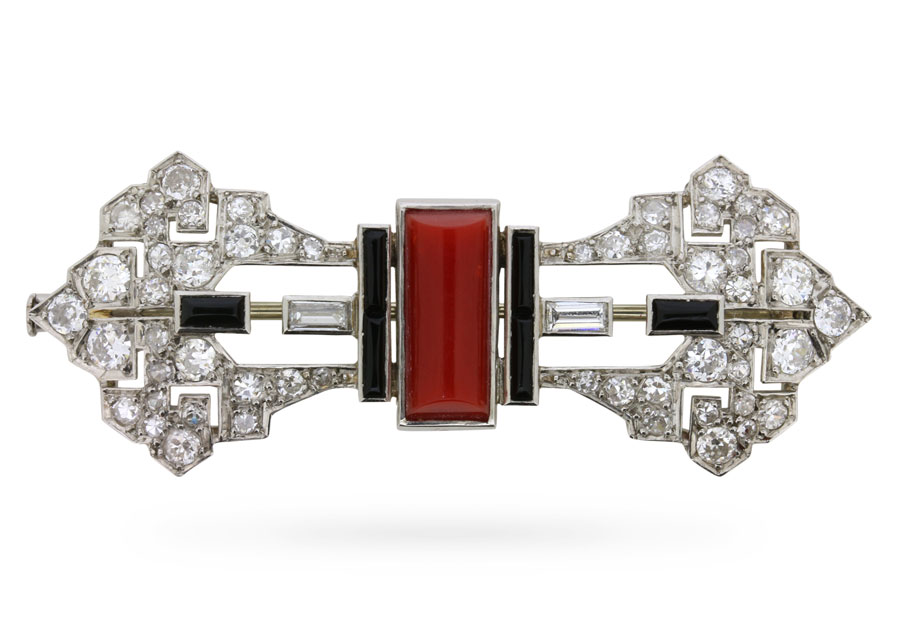 This original and quintessentially Art Deco brooch dating from the 1920s combines baguette and old cut diamonds with coral and onyx.

The Edwardian era produced beautiful dinner rings, like this one, featuring a triple cluster of old cut diamonds in an elegant and sophisticated style that can still be worn today.

Old cut diamonds were prevalent through the end of the Art Deco era in pieces like this 1.70 carat diamond cluster ring, which dates from the 1930s. The end of the 1930s brought transitional cut diamonds, which eventually evolved into the round brilliant cuts that we commonly see today.

When weighing the pros and cons of old cut diamonds vs round brilliants, it’s important to remember that despite their similarities, they’re two completely different types of stones.

Old cut diamonds predate the discovery of the most productive African mines, which produce the highest quality diamonds in the world. At the time these antique stones were cut, there were far fewer diamonds available and cutters were generally working with lesser quality stones than are available today. Diamonds at this time were cut with a focus on maximising their carat weight, and often their colour and clarity, often at the expense of their brilliance. A hand-cut stone will never match the precision of a machine cut stone, but that’s part of their unique charm. Old cut diamonds must be held to a different standard than modern cuts, and while a certified stone is more desirable to some buyers than an uncertified stone, it’s important to remember that old cut diamonds are often unfairly penalised by certifying organisations because they’re graded against modern standards.

Modern diamonds, regardless of their shape, are available in an almost unlimited supply of virtually any combination of specifications and pricepoints that you can imagine. On the other hand, old cut diamonds are dwindling in supply, and concessions will most likely have to be made regarding some of the 4Cs. For many, this is a sacrifice well worth making for the opportunity to own a one of a kind piece with history.

When shopping for an old cut diamond, or a modern round brilliant cut, the most important thing is to choose one that you love!

A stunning old cushion cut diamond is the centre o

An old oval cut ruby is the centre of this lovely

A stunning 1.75 carat diamond is the focus of this